Europe was targeted by 142 terrorist attacks in 2016, according to Europol. While the security services managed to foil scores, and other failed for different reasons, the human cost has been high.

States have therefore been seeking to stay one step ahead of their enemies by implementing a range of measures. But the biggest countries have very different approaches to tackling the threat 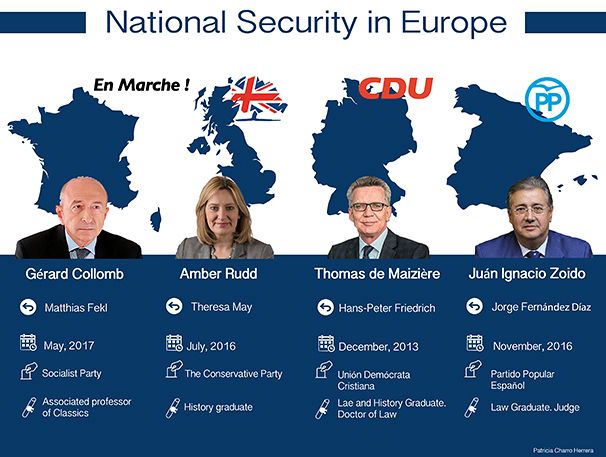 France: soldiers on the streets

As it moves towards its second year under a state of emergency, France is the biggest European country to have deployed the army to maintain internal security. After a botched attack on police on Paris’ Champs-Élysées two weeks ago, interior ministry, Gérard Collomb, indicated that France would extend the current regime until at least the autumn.

Currently in France the police and armed forces are empowered to protect critical infrastructure, disperse crowds to maintain ‘public order’ and even to close places of worship in which extremist activity is suspected. According to Amnesty International, the French government is making use of emergency laws to restrict people’s rights to protest peacefully about such issues as labour reforms or the recent presidential elections.

If Macron’s new law is accepted, most of the emergency laws will become part of the regular security protocol, according to leading French daily Le Monde, which had access to a copy of the bill. The fundamental difference would be that the measures would to be applied only against terrorism and not to generally restore public order, as it is the case of an emergency state.

Since its declaration by president François Hollande in 2015, the state of emergency has been extended five times in two years, the same number of times that it has been activated since its inception in 1955. According to French legislation, the emergency state can last a maximum of 12 consecutive days. To be able to extend it, the government has had to justify it, detail the period of time for it to be extended and pass a bill through Parliament, each time.

If this last bill gets accepted, police could carry out searches without the oversight of a judge or force people under house arrest to give them access to their electronic devices. Only authority from the interior ministry and police prefecture would be needed.

Spain holding down the alert

Greater police reinforcement, better cooperation with the intelligence service, a strict border control and an enhanced role for the National Centre for the Protection of Critical Infrastructures – CNPIC in Spanish – remain the keys for national security in Spain since the state of alert was set at level 4 in 2015.

The CNPIC has its own alert system – NAIC – which normally matches the national alert level. Critical Infrastructures include essential services such as energy, transport or health care. Contacted by Euronews, the ministry of the interior pointed out that crowded spaces, symbolic buildings and places of worship including mosques were also covered by enhanced security.

Spain’s alert system is built on five levels from ‘low’ to ‘very high’. The current state of alert, established after the series of terrorist attacks carried out internationally in June 2015, permits:

• a greater mobilisation of security forces in the streets – with restrictions on police leave and other duties;
• cooperation between private security companies, National Police and Civil Guard to protect critical infrastructures;
• a state of alert for the armed forces in case pf meed

“The armed forces are not directly involved in the current state of alert, as it is the case of France, for instance, but they remain under alert. That means they could be called to support security forces in meeting objectives if it is truly needed and that they may have to act imminently”, according to the Ministry.

After the World Gay Pride celebration last June in Madrid, the Spanish security forces have been internationally acclaimed in which remains the first city to host simultaneously the European and World Pride. The government considered, but rejected, the idea of raising the alert level to maximum during this period 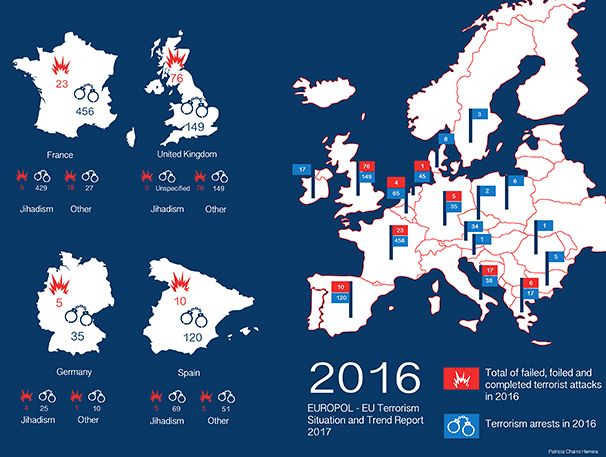 A series of terrorist attacks around the UK election pushed the issue to the front of national consciousness.

Prime Minister, Theresa May had declared the second highest alert state in 2014 – categorized as ‘severe’ – during her term as Home Secretary. It remained at that level until a suicide bomber blew himself up outside a concert in the northern city of Manchester when the maximum ‘critical’ level – meaning another attack is imminent – was declared. The emergency state only lasted for five days as the authorities unravelled the details around the attack.

The key difference between the two levels was the presence of armed forces on the streets, known as ‘Operation Temperer’. Her predecessor as prime minister, David Cameron, had managed to avoid activating the plan which is controversial because of the way British troops were used to clamp down on civilian life during the worst moments of the conflict in Northern Ireland..

Nevertheless, Tony Blair’s had deployed tanks and 400 soldiers to defend Heathrow Airport in 2003 but as with more recent events, the alert was quickly wound down.

Germany ‘a matter of opportunities’

In Germany, due to its federal nature, internal security remains mainly under the control of the states. However German home affairs minister Thomas Maizière, created a framework for ‘federal exitting centers’ to track and retain refugees whose asylum papers were rejected which has seen widespread uptake.

Despite the initial criticism against the tougher security measures proposed after the truck attack on Berlin in December, Angela Merkel’s government unveiled a series of measures to avoid further incidents. “We agreed on the introduction of tougher terms for residency. We are going to strengthen the requirements for asylum seekers who may be lying about their identity. We also agreed on easier conditions for putting people on custody ahead of deportation and to set electronic tracking tags for terrorist suspects,” Maizière stated at the time.

A spokesman for the German Ministry of Interior told Euronews that terrorists will always be looking to hurt Europe and broad measures need to be in place to restrict their possibilities for doing so: “The threat posed by Islamist terrorists in Germany has not fundamentally changed, despite the Berlin attack. The most recent attacks in Germany by people who were at least inspired by IS propaganda show that the threat may become real any time. Europe is a single area of threat and attacks may happen at any time; this is a matter of opportunities, not of priorities on the part of the attackers.”

Last March, the Interior Minister launched the police anti-terror exercises or GETEX, the German acronym for Joint Terrorism-Defence Exercise. Soldiers and police forces were called to simulate an emergency state and perform as such during three days. The presence of the military in a role usually assigned solely to police is controversial in Germany and shows the extent of the perceived threat.