Despite the rain, thousands of Slovaks took to the streets to protest against both corruption and obscure business-government relations.

The idea to protest came about spontaneously during a phone conversation between two secondary school students, Karolína Farská and Dávid Straka, and, as they claim, was inspired by a wave of massive anti-corruption protests in Romania earlier this year. 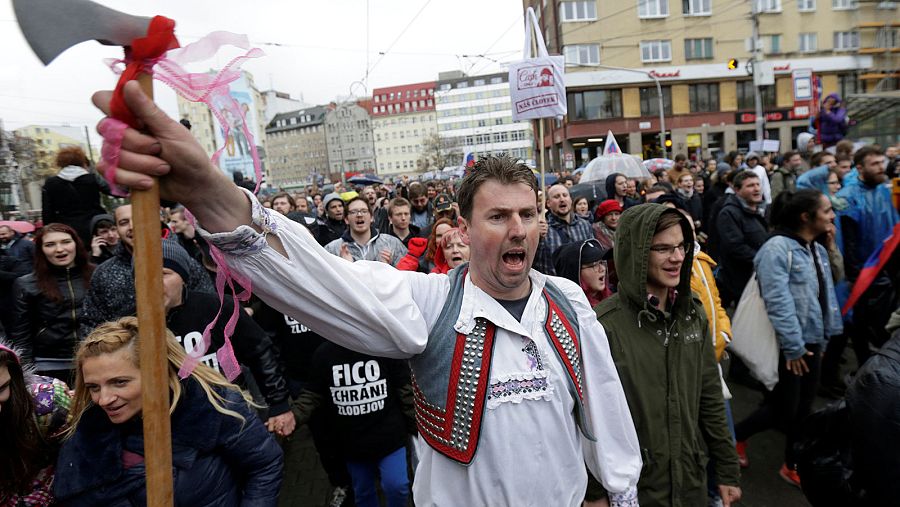 Like Romania, Slovakia is low in the Corruption Perception Index published every year by watchdog Transparency International.
In the 2016 edition, the country was ranked 54 out of 176 with a score of 51 points.

“We both study in Slovakia”, Farská said at the scene, “and in the future we plan to stay in Bratislava, work here and make this country a better place. But there are certain things that make it difficult.” 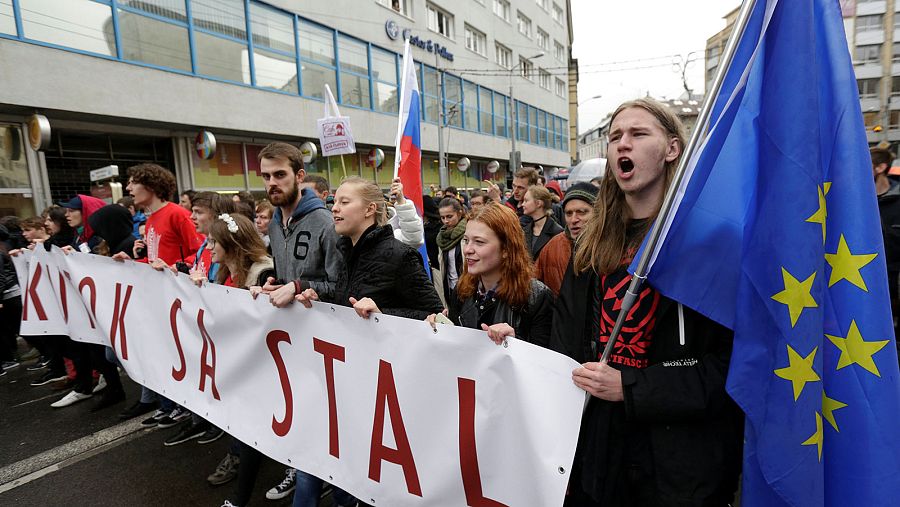 They march against the scandals involving Robert Kaliňák, and interior minister and the Slovak Prime Minister Robert Fico’s closest ally.

Last year, Kaliňák was accused of accepting suspicious 260,000 EUR payment from businessman Ladislav Bašternák, and also of poor investigating by police of whom he is in charge.

Fico himself, the longest serving head of Slovak cabinet (2006–2010, 2012–2016, since 2016) and a leader of social-conservative SMER-Social Democracy party, was targeted too, being attacked for the apartment that he rents from Bašternák in the luxury Bonaparte residential complex in Bratislava.

But it was not just the obscure connections between members of the government and local oligarchs that inspired protesters to take to the streets, but also a general poor condition of Slovak state.

One of the speakers was Zuzana Hlávková, one of the most famous Slovak whistleblowers. While working as an expert at the Slovak Ministry of Foreign Affairs, she revealed the side-stepping of public procurement rules during Slovakia’s EU Council Presidency. Being ignored by the minister, she decided to reveal the scandal on Transparency International’s blog.

“What happened to me, could have happened to everyone else. Patients, entrepreneurs, students. It seems that many lose faith in justice, and have a feeling that their voice doesn’t matter”, she said.

“You must believe the things may change”, said Maroš Kramár, a movie star and one of many celebrities who attended the march.

“The change will surely come, but this should be left to the time of election. I would like our leaders who take up the reins of government to listen us up and to put the rein in a different direction,” he continued.

Kramár is an actor, recently known for his role as Head of the Government in the hit political thriller ‘Kidnapping’. The movie is based on a real event of kidnapping of the president’s son during the rule of authoritarian Prime Minister Vladimír Mečiar. The overwhelming success of the film was one of the major inspirations for young people to learn more about Mečiar’s reign – the first non-liberal democracy in Central Europe.

At the head of the march they were carrying the slogan “Skutok sa stal” – “The Deed was Done”. It was reference to Mečiar’s praise of the abuse of government’s power, which many of the protesters observe also in the modern era.

But the outcry was not just from ordinary citizens or celebrities.

Slovak president Andrej Kiska supported demonstrators saying on Monday: “If we stay calm, nothing will change in this country. I always encourage people to be active and to react in a proper way when they see that something does not work.”

The protest was also backed up by a massive campaign in the liberal media, such as “Denník N” daily or “Týždeň” weekly, that openly called on people to participate.

He announced his government will be developing more intensive cooperation with the Organisation for Economic Cooperation and Development (OECD) in fighting irregularities, among other actions.

But Slovaks don’t seem to be buying it.

“Mr Fico, Mr Kaliňák – you are shame for this country,” the protesters shouted.