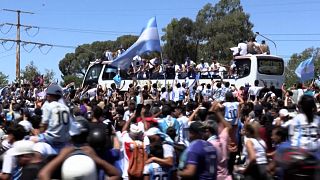 This week, several Father Christmases dashed through Capljina in southern Bosnia and Herzegovina, not on reindeer sleighs but on donkey backs.

This week, several Father Christmases dashed through Capljina in southern Bosnia and Herzegovina, not on reindeer sleighs but on donkey backs.

Due to extreme weather conditions, hundreds of travellers were left stranded at Keflavik Airport in Iceland. Coastal winds remained strong, and routes in many areas became heavily affected by the drifting snow.

The widow and mother of a Ukrainian soldier who was killed in action while fighting against Russian troops in April have placed a Christmas tree on his grave in the city of Lviv, as they prepare to spend their first Christmas holidays without him.

Hundreds of demonstrators protested against the new Peruvian President Dina Boluarte and the Parliament in Cusco's famous Plaza de Armas.

And a parade to celebrate the Argentine World Cup champions was abruptly cut short Tuesday as millions of people poured onto thoroughfares, motorways, and overpasses in a chaotic attempt to catch a glimpse of the national team that won one of the greatest World Cup finals of all time.