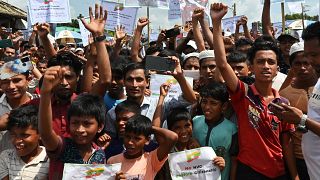 Rohingya refugees held "Genocide Remembrance Day" rallies across the huge network of squalid camps in Bangladesh where they live in dire conditions, marking five years since fleeing from a brutal military offensive in Myanmar. In August 2017 around 750,000 of the mostly Muslim minority streamed over the border from mostly Buddhist Myanmar from the onslaught, which is now the subject of a landmark genocide case at the UN's top court. Today there are nearly a million Rohingya, half of them under 18, in rickety huts in a network of camps in southeastern Bangladesh where the mud lanes regularly become rivers of sewage during monsoon rains.