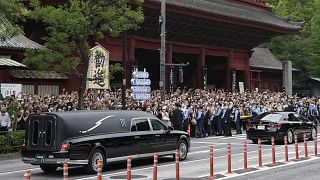 People pay their respects to Abe at temple

People were queuing at Tokyo's Zojoji Temple to pay their respects to Shinzo Abe, ahead of a private funeral ceremony for the assassinated former Japanese prime minister.

The government is expected to hold a separate memorial service at a later date.

The hearse passed a number of significant buildings including Liberal Democratic Party (LDP) headquarters, the Prime Minister's residence and the Parliament building.

Abe, 67, was shot from behind in Nara in western Japan while giving a campaign speech.

He was airlifted to a hospital and later pronounced dead.

The attack was especially shocking in one of the world's safest countries, where guns are strictly controlled.