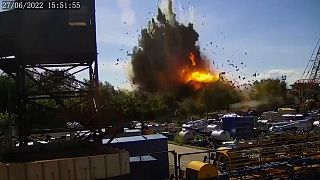 Two missiles struck the area: one hitting the Amostor shopping centre, and the other hitting the neighbouring Kredmash automotive factory.

The missile can be seen flying directly towards the site before a large explosion occurs. Security cameras captured debris raining down onto a public park as it struck the nearby shopping centre, and people diving for cover.

Ukraine’s President Volodymyr Zelensky said on Monday that hundreds of people were inside the shopping mall at the time of the attack. He said the site had no strategic value and presented no threat to Russian forces.