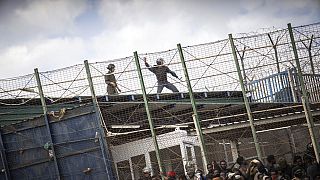 A massive attempt by migrants to storm the barrier between Morocco and the Spanish enclave of Melilla resulted in "unprecedented violence" that killed at least 23 sub-Saharan Africans and has sparked fears of worse to come.

"It was like a war, we were holding rocks, little rocks, to fight the Moroccan military, who beat us by any means, with sticks," said a 20-year-old Sudanese migrant at a detention centre inside Melilla.

"I climbed up the fence but a Moroccan guard hit my hands. I fell unconscious on the Spanish side, where I was beaten up by Spanish forces," said another.

They were among 2,000 migrants who on Friday stormed the heavily fortified border between the Moroccan region of Nador and the enclave of Melilla.

At least 23 migrants died and 140 police officers were wounded, according to Moroccan authorities -- the heaviest toll in years of such attempts.