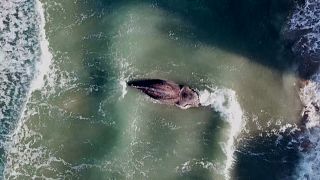 A dying humpback whale measuring 12 metres long and weighing around 25 tonnes appeared off the coast of Tavernes de la Valldigna coast, in Spain's Valencia region. The animal, first spotted on February 26th, was "extremely weak and with several cuts on the dorsal fin" according to Valencian oceanographic experts.