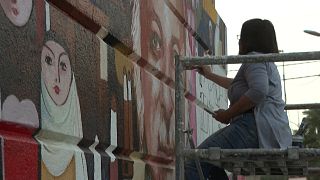 Perched on a scaffold at a busy intersection, the 49-year-old artist and instructor at the Baghdad College of Fine Arts is adding final touches to a mural dedicated to celebrated Iraqi poet Muzzafar al-Nawab.

He launched the initiative nine months ago in a bid to "bring beauty to the city and move art to the streets in order to get rid of the grey and dusty colours" that hangs over Baghdad.

Majed, an artist more accustomed to exhibiting her work in the cosy and reflective settings of galleries, at first had helpers to create the street art.

But she has turned to work alone, undaunted by the "huge challenges" she faces as a woman in a largely conservative, male-dominated society.