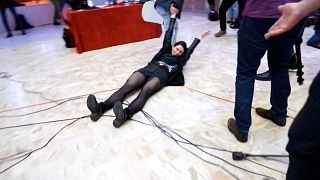 A member of the "Ibiza collective" was evacuated after disrupting Marine Le Pen's press conference in Paris by holding up a heart-shaped sign with a photo of the Rassemblement National candidate and Vladimir Putin.

French far-right presidential candidate Marine Le Pen warned Wednesday against sending any more weapons to Ukraine, and called for a rapprochement between NATO and Russia once Moscow’s war in Ukraine winds down.

Le Pen, an outspoken nationalist who has long ties to Russia, also confirmed that if she unseats President Emmanuel Macron in France’s April 24 presidential run-off, she will pull France out of NATO’s military command and dial back French support for the whole European Union.