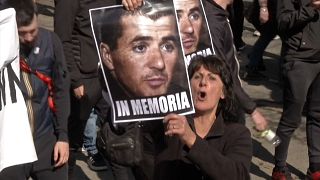 Clashes with police as thousands march for murdered nationalist

A demonstration by thousands of supporters of murdered Corsican nationalist Yvan Colonna turned violent on Sunday amid fears the clashes with police could delay talks between the island's political leaders and the French government.

The clashes involved more than 100 young people -- often hooded and wearing gas masks -- in front of the prefecture in the city of Ajaccio.

Around 4,000 people took part in the protest, according to local authorities, while organisers put the crowd at 14,000. They included the Mediterranean island's nationalist and pro-autonomy leaders and came in response to Colonna's killing in a prison in southern France last month.