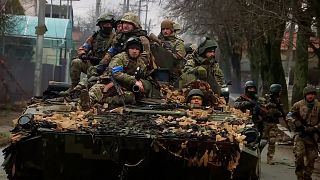 Ukrainian troops clear roads in a city north of Kyiv

President Volodymyr Zelenskyy warned that with the withdrawal of Russian forces from the Ukrainian capital region, a potentially catastrophic situation for civilians is created by mines left around homes, abandoned equipment and even the bodies of those killed.

They placed red rags on abandoned ammunition to mark it as likely to explode.

Ukraine and its Western allies have reported increasing evidence of Russian forces withdrawing from the vicinity of Kyiv and building up their numbers in eastern Ukraine.