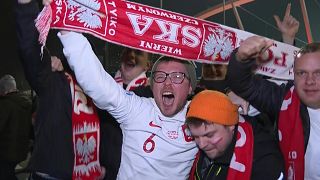 Poland fans rejoice as they leave the Silesian Stadium after watching their side grab a World Cup final spot thanks to a 2-0 win over Sweden.

Poland fans rejoice as they leave the Silesian Stadium after watching their side grab a World Cup final spot thanks to a 2-0 win over Sweden.

Robert Lewandowski slotted home a second-half penalty as Poland booked their berth at the World Cup finals with a 2-0 win over Sweden in Tuesday's play-off.

After the Poland captain converted a spot-kick, Piotr Zielinski put the game beyond doubt with a superb second goal for the hosts in Chorzow.

"We had many problems before this match," said Lewandowski.

"A lot of our players were injured, including me, I had a problem with my knee," he added, having sat out Thursday's 1-1 draw with Scotland.

"We suffered, but now we can celebrate. I am proud and happy."

Veteran Zlatan Ibrahimovic came on for the final 10 minutes for Sweden, but the 40-year-old striker was unable to influence the result and will miss out on a third appearance at a World Cup finals.