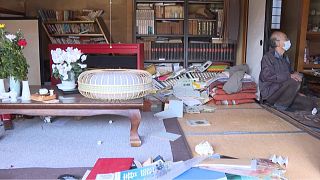 Four people were reported dead and more than 100 injured in Japan on Thursday after a powerful overnight earthquake rattled large parts of the east coast and prompted a tsunami warning, authorities said.

Residents and officials in the country's northeast were still trying to assess the damage early on Thursday, after the 7.4-magnitude quake that hit shortly before midnight.

The quake off the coast of Fukushima derailed a bullet train, opened cracks in highways and threw products from shelves in shops.