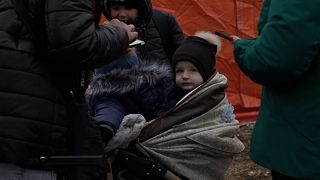 Dozens of tents had been set up, with refugees given food and shelter by the Red Cross on arrival.

Footage filmed by The Associated Press showed heavy snow in the area, and many people crossing over on foot.