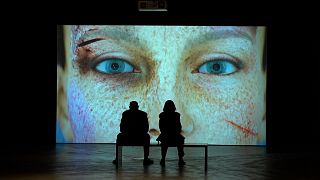 The new exhibition, which is being held at the ARKEN Museum of Modern Art on the outskirts of Copenhagen, features nearly 120 works by Danish and international artists, some dating from the late 19th century, others from last year.

Denmark's most famous woman, Queen Margrethe II, who recently celebrated 50 years on the throne, attended the opening of the exhibition on Friday (4 February 2022).

According to the museum, the history of the women's movement began to leave its mark on the art world around 1870.

Thanks to new ideas about women's emancipation and a new outlook on art, more women artists were given the opportunity to practice their art.

The organisers say that countless women artists have rebelled against traditional representations of women.

The recent #MeToo movement has shown that the battle for women's rights continues, they say.