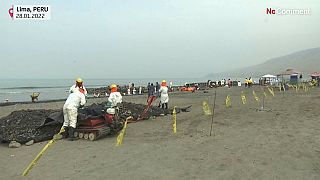 A Peruvian judge on Friday banned Repsol's Peru director and three other executives from leaving the country for 18 months while the government investigates an oil spill at a refinery run by the Spain-based company.

A Peruvian judge on Friday banned Repsol's Peru director and three other executives from leaving the country for 18 months while the government investigates an oil spill at a refinery run by the Spain-based company.

Peru authorities are investigating Repsol following the oil spill on Jan. 15, which was reported after surging waves caused by the eruption of an underwater volcano near Tonga.

Peru declared last week an environmental emergency after announcing that 21 beaches on its Pacific coast were contaminated by the spill of 6,000 barrels.

Prosecutors also opened an investigation for the crime of environmental contamination.

The company has said that it's cooperating with the authorities in the investigation and also working on the cleaning of the beaches affected.

Repsol hired more than 2,000 people, including local fishermen, to clean the beaches. The company has also promised to deliver food baskets to affected families.