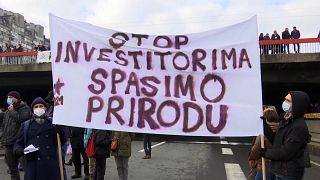 Hundreds of environmental protesters demanding the cancellation of lithium mining projects in Serbia took to the streets on Saturday, blocking roads and a border crossing.

Traffic on Belgrade's main north-south highway was halted for more than an hour.

Environmental groups want the government to completely stop the possibility of lithium mining in western Serbia.

Mining giant Rio Tinto has been exploring in the west of the country, but environmental groups want the project abandoned because lithium mining would devastate the environment.

As Serbia faces an electricity shortage, Serbian President Aleksandar Vucic has ignored European Union calls for countries to cut CO2 emissions and pledged to continue and even expand coal mining for power plants.