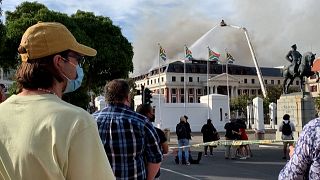 Footage showed fires burning in windows, with firefighters deployed to try to put out the flames.

Sunday's fire destroyed offices and caused some ceilings to collapse in a site that has hosted some of the country's most important moments.

Smoke was billowing from the building on Monday as several firefighters doused the already damaged structure with water.

Completed in 1884, the historic section is where Parliament holds treasures, including about 4,000 heritage and art works, some dating back to the 17th century.

The collection includes rare books and the original copy of the old Afrikaans national anthem 'Die Stem van Suid-Afrika' ('The Voice of South Africa'), which was once damaged.

It also includes a 120-metre (390-foot) long Keiskamma tapestry, named after a river in the south-east of the country, which traces the history of South Africa from the first indigenous people, the San, to the historic democratic elections of 1994.