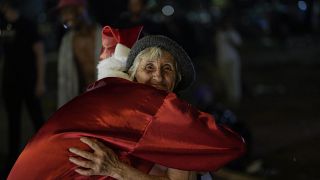 Santa Claus delivered a bit of Christmas cheer Tuesday to homeless people in the Brazilian city of Sao Paulo, where thousands live in gritty and harsh conditions in the streets.

Activists from the NGO "Sao Paulo Invisible," a group dedicated to helping the homeless population with clothes and food, handed out food packages to people who gladly welcomed a hot meal.

Many said they had not had a meal for more than a day.

The charity aims to help the estimated 24,000 people who live on the city's streets. "

Experts say the number of people without housing has increased by 65% in Sao Paulo since the start of the pandemic last year.

Some became homeless after losing their jobs and couldn't afford to maintain their housing.

Many expressed their appreciation for the care packages handed out by Santa, providing some holiday cheer for people who have seen very little cheer over the past year.