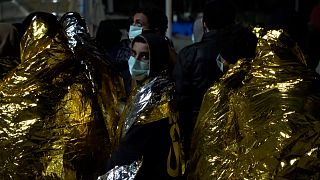 Over 300 migrants rescued off coast of Calabria

The Italian Coast Guard rescued over three hundred young men and boys, mostly from Egypt, in heavy storms as their fishing boat floundered off the coast of Calabria Saturday night.

In an operation that finished at dawn Sunday morning, the Coast Guard rescue team from Roccella Ionica made three trips out to the fishing boat where they transferred groups of migrants to their rescue boat and brought them to port barefoot, drenched and shivering.

The Calabrian coast has seen a surge of migrant arrivals in the past few months, but the region is still not equipped like the ports in Sicily to handle big numbers.

Volunteers from the local Red Cross were on site handing out plastic clogs, blankets and food.

The migrants were transferred to a recently built shelter with a capacity to hold 120 people. So far this year, over 57,800 migrants have arrived in Italy by sea.