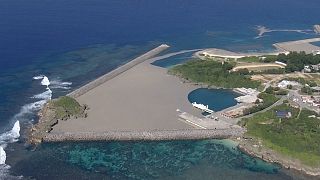 Okinawa Prefecture in southwestern Japan has begun removing large volumes of pumice stones that have drifted into a port in Kunigami Village.

The stones began appearing along the coasts of the prefecture earlier this month. They were thrown up by an undersea volcano that erupted in August near the Ogasawara island chain in the Pacific Ocean.

The prefecture said it will cost about 650,000 dollars to clear the pumice at Hentona and another port in the village. The central government's disaster recovery program is to cover 80 percent of the cost.

The prefecture plans to start removing the stones from other ports as soon as possible.

A prefectural official says ports will be closed to prevent more pumice from drifting in, and they hope to complete the clean-up operation in two to three weeks.