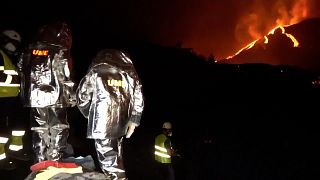 Layers of ash accumulated across slopes of La Palma volcano have triggered small landslides, according to scientists monitoring the developments of the erupting volcano on Spain’s Canary Island.

A video captured by researchers from Canary Islands Volcanology Institute on Saturday, October 16, showed a large cloud of ash rising into the sky, followed by small landslides.

According to a report by Spain’s El Pais newspaper, the height of the column of smoke reaches some 4,500 meters into the sky.

On Saturday, some airlines cancelled their flights to La Palma due to the volcanic ash, but the island’s airport continued operations despite cancellations.

According to the latest report by the European Union’s Copernicus Emergency Monitoring Service, some 1,826 buildings have been destroyed by the advancing lava since the beginning of the eruption on September 19.

The lava flows have also covered around 742 hectares of land and forced the evacuation of some 6,800 residents.

The flow of lava has reached the Atlantic Ocean, creating a delta of new land which authorities said has reached a surface area of 34 hectares (84 acres).