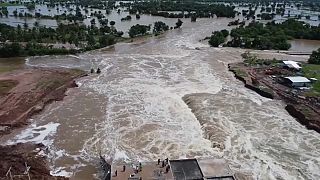 Authorities rushed to repair levees and a floodgate damaged by the overflow of a reservoir in northeastern Thailand, which also caused flooding affecting more than 4,000 nearby households and farm areas.

Lam Chiang Krai reservoir in Nakhon Ratchasima province was 50% over its maximum capacity when a small section of its levee was breached by rising water brought on by heavy rains from the tropical storm Diammu, also called Tianmu, that gathered over the weekend.

Kitikul Sepasiraporn, the head of Nakhon Ratchasima Irrigation Department, hoped the repairs can be done within a week allowing the authorities to control the release of water into the spillway.

Rescue workers continue to evacuate nearby residents in fear of further damages to the reservoir's levees.

Officials also issued fresh warnings about rising water levels in six more provinces, including Bangkok, after at least seven deaths were reported in the flooding triggered by the storm.

The Department of Disaster Prevention and Mitigation said one person was also reported missing and that total of 197,795 households in 30 provinces, mostly in the north, northeast and central regions had been affected.

The department said the situation in 13 provinces have improved since the flooding began over the weekend.