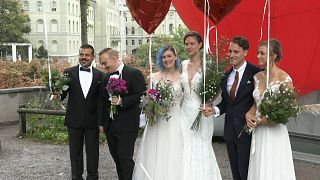 Nearly two-thirds of Swiss voters backed the government's plan to introduce same-sex marriage in a referendum held Sunday, with campaigners calling it a historic day for gay rights in Switzerland.

With results in from 20 of the wealthy Alpine nation's 23 cantons, 64 percent of voters backed the move, on a 52 percent turnout.

Switzerland was one of the last countries in western Europe where same-sex marriage remained illegal.

The government's "marriage for all" proposals were challenged by opponents, who successfully triggered a referendum.