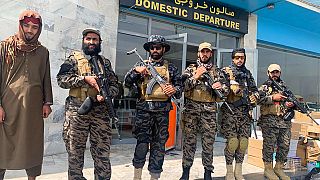 The Taliban took full control of Kabul International Airport on Tuesday after the last US plane left the airport, marking the end of the longest war in US history.

Taliban vehicles drove the only runway at Hamid Karzai International Airport, north of the military side of the airport.

Heavily armed Taliban fighters marched through the hangars before dawn, overtaking some of the seven CH-46 helicopters the State Department used for evacuations before making them unmanageable.

Taliban fighters hoisted their white flags above the airport barricades while others guarded the civilian side of the airport. Inside the hall, dozens of bags and a few things were strewn on the floor.