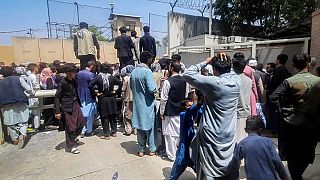 Scores of civilians carrying possessions were spotted camping outside the French embassy in Kabul on Thursday as the evacuation efforts by a number of countries, including the US, UK, France and other European nations continue.

Civilians both old and young crowded against blast walls set up outside the embassy, hoping to get in and to eventually be transported out of the Afghan capital that was recently taken over by Taliban forces, following the US & NATO forces pulling out of the country.

A number of Western countries, including the US, UK, France and other European powers are operating flights out of Kabul for their citizens as well as for Afghans who collaborated with NATO forces during their 20-year presence in the country.

Hundreds of civilians were seen on main avenues leading to Kabul airport on Thursday, in a bid to get out of the embattled capital which was recently taken over by Taliban forces.

People of all ages were seen attempting to make their way to the airport by car or on foot through checkpoints manned by Taliban forces.

The Taliban have sought to portray themselves as more moderate than when they imposed a strict form of Islamic rule in the late 1990s.

But many Afghans remain skeptical.

Older generations remember the Taliban's previous rule, when they largely confined women to their homes, banned television and music, and held public executions.