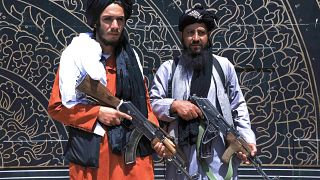 A Taliban fighter said offices would reopen and work would return to "normal" in Afghanistan's second largest city of Herat after it was captured by the insurgents. After seizing Herat earlier this week, insurgents were seen gathered outside the provincial governor Abdul Saboor Qand's compound and some in the city were brandishing Taliban flags. The Taliban have made major advances in recent days, capturing Herat and Kandahar.

"The government does not help us, we have no water, no food, and no shelter": Afghan families who found shelter in a Kabul park after fleeing the Taliban's advance describe harsh living conditions. Insurgent fighters are now camped just 50 kilometres (30 miles) away from the Afghan capital, with the United States and other countries scrambling to airlift their nationals out of the Afghan capital ahead of a feared all-out assault.

Passengers headed to Kabul's Hamid Karzai International Airport seeking to leave Afghanistan in the face of the lightning Taliban offensive that is increasingly isolating the capital. Tickets for flights out of Afghanistan have been scarce ever since militants took control of several of the country's provincial capitals over the past week. The offensive comes after U.S. President Joe Biden ordered the complete withdrawal of American troops from Afghanistan by August 31.