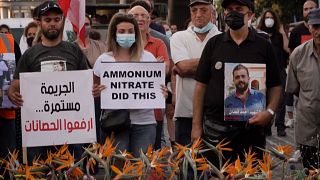 Symbolic funeral procession at Beirut port after anniversary of blast

Symbolic funeral procession at Beirut port after anniversary of blast

Families of the victims of last year's devastating Beirut Port explosion marched through the Lebanese capital's centre Sunday 8 August, holding pictures of their relatives killed in the blast.

Families of the victims of last year's devastating Beirut Port explosion marched through the Lebanese capital's centre Sunday 8 August, holding pictures of their relatives killed in the blast.

The protest was part of their campaign to push for what they see as justice, as the local investigation stalls.

The families marched from central Beirut, past some of the neighbourhoods badly damaged by the blast, and where many perished.

They marched to the Beirut port, mostly in silence. They raised banners reading: "We are all victims. The criminal is the same."

The "criminal" referred to is the ruling class in Lebanon, which the families hold responsible for the blast.

"We want justice," some of those marching, mostly dressed in black, chanted. Others said: "Our blood is not for sale."

The August 4 explosion took place when thousands of tonnes of ammonium nitrate stored at Beirut Port for years exploded, devastating the city, killing over 214 and leaving thousands injured.

Many of Lebanon's political and security leadership knew of the presence of the material, and did little despite warnings of its reckless storage in a residential area, along with other combustible material.

The investigative judge leading the probe has summoned senior officials he accused of intentional homicide and negligence, and asked parliament and security agencies to lift immunities so he can question those officials. The political leadership closed ranks, refusing to lift immunity and accused the judge of political bias.

The moves were seen by the families and critics of the government as obstruction of the judge. Sunday's protest comes only days after the commemoration of the one year since the blast, in which several thousand Lebanese took to the streets demanding justice.