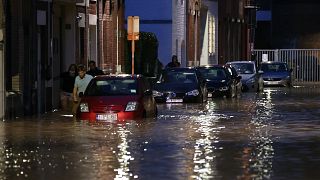 The city of Namur was heavily impacted by new floods, especially the Bouvignes area. Torrents of water rolled down the streets around 7:30 PM (5:30 GMT PM), to the point that the asphalt rose in places.

There are also gas leaks and fuel oil spilled into to the streets. Shortly before 1100 PM, the mayor of Dinant, Axel Tixhon made an initial assessment: "We have a lot of material damage at this time, including a lot of vehicles that have been washed away by the water, and material damage to the residents, who had never experienced events like these. They were not prepared."

Emergency Preparedness was called in to evacuate debris and vehicles. Four people had to be relocated. The station of the city of Mosane is also affected by the floods after heavy rains in the early evening in the province of Namur. Rail traffic was already interrupted this weekend in the impacted section.