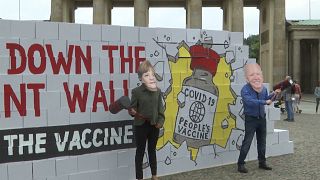 The group, Avaaz, staged a protest in Berlin on Wednesday, one day before the German chancellor is making her 19th and likely final official visit to the US on Thursday for a meeting with Biden.

Two activists, dressed as Merkel and Biden, symbolically teared down a wall in front the Brandenburg Gate.

Avaaz's senior campaigner, Daniel Boese, said that a temporary suspension of the vaccine patents would be "a very clear solution that would help to quickly produce vaccines in billions of doses worldwide."

European Union leaders have criticised the US call to waive COVID-19 vaccine patents, arguing the move would yield no short-term or intermediate improvement in vaccine supplies and could even have a negative impact.

Merkel of Germany, home to many Big Pharma companies, went the farthest of all, cautioning that relaxing patent rules could harm efforts to adapt vaccines as the coronavirus mutates.

While the US has kept a tight lid on exports of American-made vaccines so it can inoculate its own population first, the EU has become the world's leading provider, allowing about as many doses to go outside the 27-nation bloc as are kept for its 446 million inhabitants.