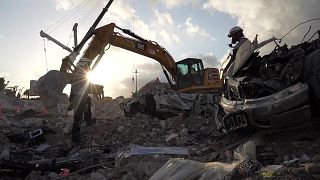 The death toll in the Miami-area condominium collapse climbed to 94 Monday as officials planned to step up security at the site to make sure the personal possessions of the victims are preserved for their families.

Miami-Dade County Mayor Daniella Levine Cava said 22 people remain unaccounted for in the June 24 collapse of Champlain Towers South, an oceanside condo building in Surfside. Levine Cava said 83 of the victims have been identified but "the process of making identifications has been made more difficult as time goes on.”

Surfside Mayor Charles Burkett said officials have decided to increase security around the debris pile to ensure that the site is preserved. Only authorized personnel will be allowed.

Miami-Dade Police Department Director Alfredo Ramirez III said there has been “no criminality” at the site, but officials want to make sure the area is secure so crews can continue to preserve personal items found in the rubble.

Burkett said work crews recently found a business card for an artist and then found several paintings they carefully pulled out of the debris pile to preserve for family members.