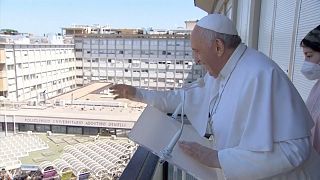 Pope Francis on Sunday made his first public appearance since surgery last week, greeting well-wishers as he stood on a hospital balcony.

Francis, 84, has been steadily on the mend, according to the Vatican, following his July 4 scheduled surgery to remove a portion of his large intestine.

On Sunday, his voice sounded a bit weak as he greeted a small crowd outside Gemelli Polyclinic at noon.

That is the hour when traditionally he would have appeared from a window at the Vatican overlooking St. Peter’s Square.