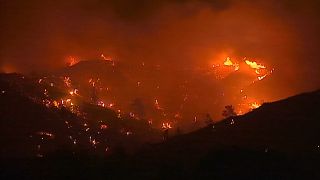 Four deaths from the massive blaze still raging in certain rural regions of Limassol and Larnaca, Cyprus, were confirmed this morning.

The bodies of four Egyptian workers were found after going missing in Odou, Larnaca yesterday afternoon. Their burnt-out car was found almost half a kilometer from the community and Cypriot Interior Minister Nikos Nouris confirmed that their bodies had been found early this morning. Coroners were on site for an autopsy.

It is a tragedy that the country has not witnessed since the Turkish invasion of 1974, said President Anastasiades at the Vavatsinia fire fighting effort coordination centre, following a situation briefing by officials. It is one of the most destructive fires in the history of Cyprus, he added, "and unfortunately it has taken lives". He further stressed that the relevant services will begin recording the damage caused by the blaze as soon as it is safe to do so.