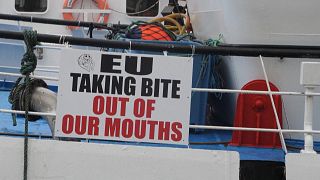 A flotilla of around 70 fishing boats moor on Dublin’s river Liffey, outside the city’s convention centre where parliament is currently sitting. Hundreds of fishermen spilled out of their boats in a march to air opposition to post-Brexit quotas, and other longstanding grievances in the sector. Wednesday marks the five year anniversary of the British referendum decision to leave the EU.