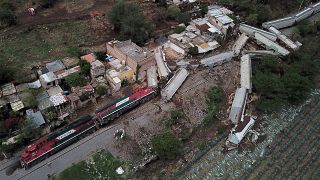 A freight train has derailed and toppled onto houses alongside the tracks in western Mexico, killing one resident and injuring three others. Two locomotives and 12 train cars overturned in the town of San Isidro Mazatepec in the state of Jalisco, the region's civil protection and fire department said on Twitter.

Aerial footage from the Bernalillo County Sheriff’s Office (BCSO) revealed the extent of the damage after a train derailed on June 14, in Laguna Pueblo, some 60 kilometres west of New Mexico’s largest city, Albuquerque. No injuries were reported after the derailment, which left train cars strewn alongside the rail.

According to media reports, the train wasn’t carrying any hazardous materials. The cause of the derailment was not immediately clear.