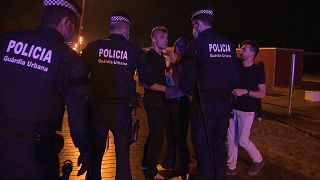 Almost 5.000 people, many of them without keeping social distance and without wearing masks, were evacuated by Urban Guard and Mossos d'Esquadra in Barcelona during the early nights of Saturday morning.

The areas with more crowds of people were Paseo del Born, beaches, and also the Arco del Triunfo. It´s the second night in a row in which police have had to clear public roads. The night of Thursday to Friday almost 3,000 people were evacuated.