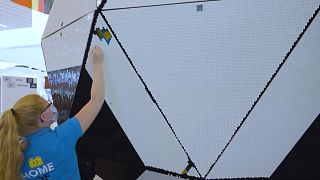 The world’s largest LEGO ball has been built at the LEGO House in Billund, the hometown of Lego, to celebrate the upcoming European Football Championship, which will kick off on June 11.

150 hours were needed to assemble the 173,600 old classic 2x2 LEGO bricks together - without glue. It is now exhibited at the LEGO House, which aims to host the biggest and best LEGO constructions.

The more than 4,10 meter (13.41 feet) tall ball in small bricks was built during the corona lockdown by LEGO house employees. Cleaners, designers, kitchen staff, Play Agents and even the CEO have all contributed to the classic black & white ball.

The proud designer Søren Hansen Hinge feels it is the classic football design. "The football design is the iconic football that everyone can recognise. We could have used the design from the European Championship, but I’m not sure everyone would recognise it as a football, even though it looks great."

The LEGO bricks were built into 75 modules that were in turn put together in special metal construction.

Cleaning assistant Kathrin Grosen commented: "It’s a great pleasure to have the opportunity to work with so many people across the various departments".

The weight of the ball is 2.5 tons included the construction, that keeps the parts together.

"The corona period has been an extremely difficult time for many people, and I can think of no better thing to bring us together than such a major sporting event – where I believe Denmark has a chance to go all the way,” says CEO Jesper Vilstrup.