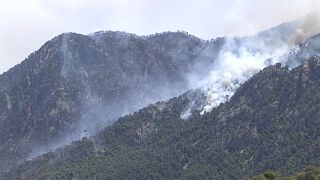 A large wildfire in Greece damaged homes and prompted evacuations on Thursday as it tore through rugged forest terrain.

Fire Service officials said eight water-dropping planes and three helicopters were involved to try and contain the blaze some 70 kilometres (45 miles) west of Athens, outside the resort town of Loutraki.

Overnight and early Thursday, authorities issued evacuation orders for six settlements outside Loutraki, in an area with many vacation homes.