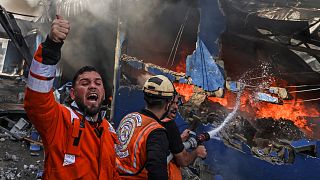 Israeli air strikes hammered the Gaza Strip Monday, after a week of violence between the Jewish state and Palestinian militants left more than 200 people dead as international calls for de-escalation went unheeded.

Overnight Sunday to Monday, Israel launched dozens of strikes in the space of a few minutes across the crowded coastal Palestinian enclave controlled by Islamist group Hamas, according to AFP journalists and the army.

Flames lit up the sky as explosions shook Gaza city.