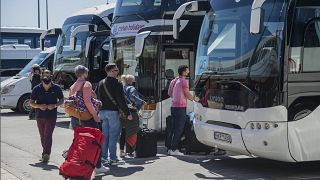 Some raced to buses and trains heading to the port where they would take ferries to the islands of the Aegean.

Greece is hoping to be a safe destination for travelers this year as it tries to revive its key tourism sector, which was battered by the pandemic in 2020.

With lockdowns lasting longer than expected, debt across the EU is set to continue rising in 2021, led by Greece which is forecast to reach a staggering 209% of its annual output.

Greece is hoping to get back half the 2019 visitor level.

It's vowed to finish vaccinating its entire island population over the next six weeks and will waive test requirements for tourists who have received vaccines made in Russia and China that are not used domestically.

Greece has only recently stabilized its rate of COVID-19 infections and deaths following a surge that started in mid-February.

Vaccinations reached record daily levels this week and roughly 1 in 10 country residents have been fully vaccinated.

Flights from Moscow sell out as Russians try to escape conscription

Iconic landmarks lit up in tribute to Queen Elizabeth II