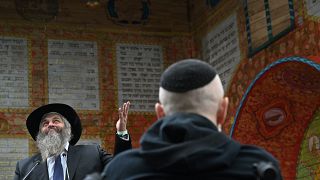 Ukrainian Prime Minister Denys Shmyhal and Chief rabbi of Kyiv Jonathan Benyamin Markovitch attend the inauguration of a symbolic synagogue at the memorial site commemorating the victims of Babyn Yar, one of the biggest massacres of Jews during the Nazi Holocaust.

In the Babyn Yar massacre a population of about 1.5 million Jews was virtually wiped out.

The synagogue opening coincides with the 80th anniversary of the killings and is Kyiv’s first new synagogue built since Ukraine’s independence in 1991.

The opening ceremony was attended by the public, media and representatives of non-governmental organisations.

More than 33,000 Jews were executed September 29-30, 1941 in the Ukrainian capital in what many historians call the largest single bloodbath of the Holocaust.