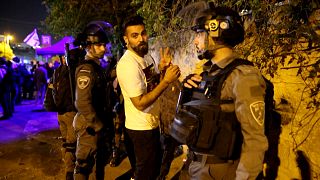 Fifteen Palestinians were arrested in Israeli-annexed east Jerusalem overnight in clashes with police over an eviction threat against four Palestinian families.

The second straight night of rioting in the Sheikh Jarrah neighbourhood was fuelled by a years-long land dispute between Palestinian refugees and Jewish settlers in the strategic district near Jerusalem's Old City.

The violence comes as Muslims prepare to mark the last Friday of the fasting month of Ramadan, with tens of thousands of Palestinian worshippers set to gather at the sacred Al-Aqsa mosque compound.

Police said protesters torched a vehicle and threw stones outside a house occupied by Jewish settlers.