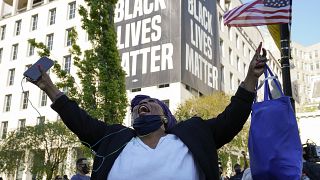 Over a thousand people flock to the south Minneapolis intersection of 38th and Chicago, where George Floyd was killed, after former Minneapolis police officer Derek Chauvin was found guilty on all counts in court.

A man celebrated the victory in a special way, by throwing dozens of $20 bills to the cheering crowd.Floyd was arrested on May 25, 2020 for a fake $20 bill.

“I was relieved and I’m still very sad because it’s super sad to celebrate such a tiny victory when we have so far to go," says one resident.