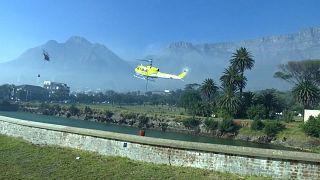 Fire crews worked for a third day to extinguish a wildfire on the slopes of Cape Town's Table Mountain on Tuesday, as the city came to terms with what officials have described as one of the area's worst blazes in years.

The University of Cape Town campus was one of the first sites to be hit on Sunday and appears to have suffered the most damage.

Numerous buildings at the university burned, including part of the near 100-year-old Jagger Library, which contained rare books and manuscripts on African studies.

Other historic buildings nearby, including a 225-year-old windmill and a renowned restaurant and tea room near a memorial to British colonial politician Cecil Rhodes, also burned down.

On Tuesday, fire-fighting helicopters dropped water on areas where the fire still smoldered and smoked on the rocky peaks of Table Mountain.

South African army choppers joined the operation to support the fire department after the helicopters were all grounded Monday because of strong winds.

The cause of the blaze is still unknown, although wildfires are reasonably common in the mountains and peaks around Cape Town during the hot, dry summer months and become especially dangerous and unpredictable when fueled by strong coastal winds, as happened on Sunday and Monday.

Four firefighters were hurt battling the fire but no other casualties have been reported.