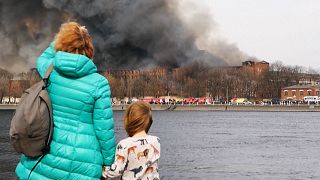 A huge fire ravaged a historic factory in the Russian city of St Petersburg on Monday.

Russia's Emergencies Ministry said one firefighter was missing and two others are being treated in hospital as attempts were made to tackle the blaze.

Huge clouds of black smoke could be seen over the city and forty people were evacuated from the nearby area, the ministry said.

The Nevskaya Manufaktura factory was founded as a clothing factory in 1841 and sits on the banks of the Neva river, in the centre of St Petersburg.