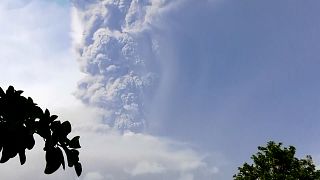 Access to a "Red Zone" taking up almost a third of the 133-square mile island near the volcano has been restricted and no one except official personnel are allowed entry.

Since the eruptions, ash has headed east into the Atlantic Ocean.

Roughly 16,000 people who live in the red zone near the volcano in the island's northern region were forced to evacuate, though there have been no immediate reports of casualties.

A cruise ship arrived Friday morning to Kingstown, the capital and main port of St. Vincent, to take evacuees to neighbouring islands that have offered their help, but no boarding had been registered by Friday evening.