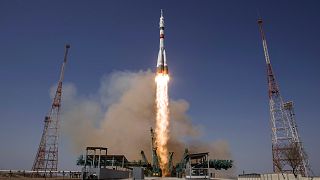 The Soyuz MS-18 spacecraft launched on Friday to the International Space Station from the Baikonur Cosmodrome in Kazakhstan.

Aboard the aircraft, two Russian cosmonauts and one NASA astronaut that will undertake a 6-month mission

The launch came three days before the 60th anniversary of Yuri Gagarin’s groundbreaking orbital flight when he became the first member of the human race to reach space.

The Russian space program Roscosmos named the Soyuz spacecraft Yuri A. Gagarin, and while the flight did not lift off from Site 1/5 as Gagarin did 60 years ago, it launched from neighboring Site 31/6 at the same cosmodrome.