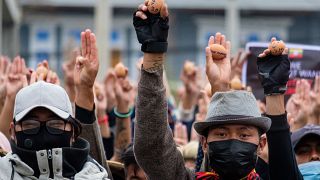 Adept at finding themes to tie together protests nationwide, anti-coup demonstrators in Myanmar took to the streets holding painted eggs, in a nod to the Christian festival of Easter.

In Yangon, one group marched through the Ahlone area chanting, singing protest songs and displaying eggs bearing slogans and faces.

Myanmar is overwhelmingly Buddhist – 87.9% according to a 2014 census – with Christians making up only 6.2% of its people.

But some symbols, such as the Christmas tree and the Easter egg, have recognition beyond Christianity.

The coup reversed years of slow progress toward democracy in the Southeast Asian country.