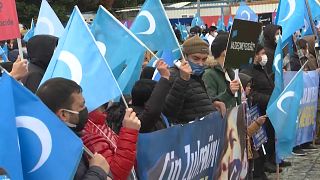 Uyghur community members in Istanbul gather to protest the visit of the Chinese foreign minister to Turkey.

Rights groups believe at least one million Uyghurs and other mostly Muslim minorities have been incarcerated in camps in the northwestern region, where China is also accused of forcibly sterilising women and imposing forced labour.

Beijing has strongly denied the allegations and says training programmes, work schemes and better education have helped stamp out extremism in the region.